Lessons from a C47 Pilot: the Core Trait of an Entrepreneur

Filed under: Things I didn’t realize I was internalizing at the time that have stuck with me & shaped my life

As a follow-up to my previous post about the “Secrets of Silicon Valley” post, there was something that Glenn Kelman, the CEO of Redfin said, that stuck with me:

This made me think of an encounter I had with a guy back when the job titles “Entrepreneur” did not have the suffused halo of glory around it that it does now. Looking back, this short conversation was one of the transformative experiences in my life. It’s what has driven me to consistently take the road less traveled in my career.

When you try to imagine the most valuable thing in the world, what does it look like? Does it look like something in a museum, where people come from around the world and pay money just to look at it? Is it a Special Thing, ancient and mysterious, that you can own? Or is it something quite else…

In 1987, I was a Pulliam Fellow at the Arizona Republic, working as a copy editor. That meant that I had most of the day free – I went in at about 3 p.m. each day, stayed until midnight and pretty much lived like a bat. So during the day, I explored the city of Tempe, where I lived, and tried to cool off by swimming and enjoying the pool (hey – I’d grown up in Wisconsin, where the rare days you got when it was sunny and warm you automatically headed towards bodies of water to enjoy this amazing gift of weather).

So I was  basking in the pool, when I was addressed by an older guy, who was leaning against the side of the pool, elbows on the fringe, watching the sun set. He looked content, but thoughtful.  He was tanned like a saddle, with piercing blue eyes, and a bemused expression on his face. He asked who I was and what I was doing in Phoenix.

I told him that I was there, fresh out of college, working for this gigantic media company. But that it was a little strange to me, because the company was so big that I felt like just a little cog in a big machine.

He frowned, and nodded his head.

“You’re coming to a point in your life where you’re going to have to make some very important decision,” he said.

I snorted, with the derision that only a 21-year-old recent college grad can muster. “Everyone keeps telling me that. But that just sounds like platitudes. What is that supposed to me to me? Every decision we make is important – we cross the street for breakfast, we get run over – hey, that was a life-changing decision! You look at it that way, hell, every decision you make is life and death.”

To his credit, he laughed. “Well, I guess that’s true. But I was thinking of something a bit different than what you do. It’s more about who you really are.”

And then he launched into the story of his life. Turns out that he was not retired, because he never planned on retiring, because every day he did what he loved. He had been a DC-3 pilot in WWII, flying the supply routes that went “Over the Hump,” or over the Himalaya mountains and into China. These were white-knuckle rides, because depending on how loaded down the old “Goonie Birds” were, you may or may not make it over these 20,000-foot peaks.

Each flight through the treacherous mountain passes was a gamble. As the odds against long-term survival mounted, the pilot I talked to said he just gave up the idea of control — that enemy fighters or sudden blizzards could trump any preparations humans could make. Simultaneously, he paid attention to all the little details that might mean the difference between survival and violent death.

He was terrified for the first few flights, and then he basically gave himself up for dead, and started having the time of his life. Most beautiful landscape in the world, wild adventures on either side of the flight, danger, and the feeling of contributing something meaningful to something really important, something that was bigger than him, something that was forever changing the world.

After the war, he started an airline. It was the wild & woolly days back then, not like today when there are basically highways in the sky, you never get lost, it’s all worked out for you. Back then, you were making it all up as you went along, trying to figure out what planes at what times into what airports would get there on time and make money.

But by his combination of daring (from the recklessness that he pursued life from flying over The Hump), and meticulous planning – because he had checked out every inch of every plane and every flight plan before he took off, which is why he survived and so did his whole crew – that combination made him successful.

He built an airline. Made millions. Had a big house and a pinup girl wife.

Was miserable. Hated running the company. Hated all the problems that come with having a lot of money.

So he divorced his wife. Gave her everything. Started from scratch. With a new woman in his life. He said that he had learned something really crazy about himself. He didn’t like being rich. 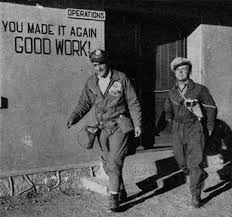 Making it back was no sure thing (image from Life magazine archives – click through for more).

He liked the struggle, the fight, the ups and downs, the thrills of BECOMING rich.

So he would repeat this pattern. Over and over again. He’d build a company – sometimes airlines, sometimes aeronautical service companies, or plane design firms – build it up until it was huge …

…and then he’d give it away, and start all over from scratch again.

I told this story to my mom, who grew up on a farm in the shadow of the Great Depression, to a father who had twice lost everything he had and worked himself into an early grave trying to provide for 8 kids … and my mom said, “That’s the stupidest thing I’ve ever heard.”

And for a long time, I agreed with her. What kind of a moron builds something only to give it all away? What kind of person can’t see that you earn money through struggle and pain? That every dollar is a treasure, and that you cling to it as hard as you can?

But then I remembered what that tough old pilot said, back when I said something very similar:

“Think about the most valuable thing in the world. Maltese Falcon, huge diamond, priceless painting – whatever. In your head, I want you to imagine having something that, if you had it, every other person you know would envy you. Just green-eyed, jealousy, eating their own heart out. Day and night, everyone wants what you’ve got, this Special Thing. There’s only one. And you have it.

But there’s a catch. Something that nobody else knows, that you’re trying hard not to let them see. The catch is that  hanging onto the Special Thing is killing you. Burning your hands. Feels like fishhooks ripping into your fingers every second you have it in your possession.

But still, everyone passing by says, “OMG! What a lucky guy! Just look at that Special Thing! I sure wish I had that thing!” All the while, it’s just killing you to hang onto it. And you can’t put it down.

The question you have to ask yourself is: would you hold onto that thing?

Would you hold on to that thing?

Or would you put it down and say, here. You take it. And while they pick it up and laugh at you – you’re the one that’s laughing at them inside. Because they have to deal with that Special Thing now. And you? You’re free.

And you’re going to build something else now. And building that … whatever it is … building that, is what makes you feel like you have the most valuable thing in the world already.

That was a man with rare courage. He was able to look deeply inside himself and not only see, but accept what it was that made him happy. And then he acted on that knowledge, even when the rest of the world said that he was an idiot. That he had lost his mind.

But he knew what he had to do. Because he literally couldn’t live any other way.

To me, that is the core trait of the entrepreneur.