If the numbers don’t lie – what shall we put above the fold?

When clicks drive coverage, what happens to hard news stories? Are we doomed to “hamster wheel journalism”?

Is the future only listicles and kitteh pictures?

There’s an interesting discussion shaping up – one that I’ve seen coming for quite some time. In an excellent piece this week, Emily Bell took on the subject of the increasing importance of web metrics in determining what gets covered, for how long, and by whom. (Full disclosure: I interviewed her for a case study years ago when she was at the Guardian and we’ve had some friendly exchanges in the years since via social media & whatnot.)

Attention in the virtual world is like money in the real world; the very presence of it attracts more of the same, producing what might seem like gross iniquities. A cat falling off a sofa is less important than riots in Venezuela, yet we can now see how our attention goes to one not the other. Measuring how and what we read online has become an obsession for all publishers.

If metrics are going to shape the news, then it is a good idea for us to attempt to get them right. Tony Haile, the chief executive of the news metrics company Chartbeat, noted on Time.com last week that most of the metrics which have been in use for measuring how we read are misleading, and that many assumptions about how people actually behave online are currently wrong. Haile argues that it is important that companies recognise that the “clicks” are a poor measure of success – “what happens when you land on the page is more important than the click that gets you there”, he says.

Big Data is watching all of us. And it never sleeps.

The evolution of web metrics has been a long and tortuous process. On the one hand, the instantaneousness of the web, and the capability to track what you click on, what you mouse over, and how long, where and under what conditions you do it – this is something that existed only in the land of George Orwell’s (formerly) paranoid scenarios of Big Brother’s two-way video screen that watched you as much as you watched it.

Back in the actual year of 1984, the idea that we would all sit passively by as our TVs monitored us and made sure that we were being good, obedient little citizens, was something only a paranoid, nightmarish mind could come up with. How times have changed. Not to get all Snowden on you, but in some of the places that I’ve worked, the governments have not been reticent to use these kinds of capabilities to target, intimidate or “disappear” those who are deemed a danger to society, and an enemy of the people.

But our focus here is the news that we read, the information we rely on to shape our worldview, and the decisions we make as a people.

Over at Upworthy, they’re still trying to figure out how to surface important content to our readers, without resorting to the “Cod-Liver Oil Approach.” That is “we know it tastes like shit, but trust us, it’s Good For You. Now take your medicine!”

“… because important, high-quality but not necessarily engaging stuff has “had a leg up for so long” it hasn’t had to compete on being compelling.

“It gets on the front page anyway. Now we have this real challenge where the story about Afghanistan or new policing methods or whatever has to compete in the same pool with Kim Kardashian or Candy Crush or everything else that’s begging for attention from the algorithms,” he said.

“Unless we figure out how to make the important stuff really engaging, I don’t know that it reaches a broad audience.”

Yeah, that’ll work in a world where we’ve got so many other options.

But there’s a hint of a solution lurking in the story. Maybe more than a hint. They cited

“… a video of a young man talking about his two gay mothers, explaining passionately why they shouldn’t be discriminated against.

It had been watched 200,000 times or so, but once its headline was changed to “Two Lesbians Raised A Baby And This Is What They Got”from its original “Zach Wahls Speaks About Family” the video took off – it’s since been watched more than 18.4m times.”

So the headline – the marketing of the story, because that’s what a headline is, especially on the web, where clever or compelling phrases are the key to getting people to click on your story – is key to grabbing people’s attention.

Early in my career, I worked with some of the old-school, hardboiled Brit editors whose whole value to the magazine was coming up with headlines so provocative and compelling that they stopped people in their tracks and made them reach out into the wire racks next to the cash registers in every grocery store in America.

If you squint just right, the web looks a little like the chaos you find in the checkout lane. A million confections, most of them bad for you, all focus-group tested in their packaging to appeal to your Reptilian Brain and bypass your willpower. Empty calories, dubious pharmaceuticals, cheap convenient items you probably don’t need, photos of celebrities on the beach with embarrassing cellulite.

Sound like the right-hand column of your favorite aggregator blog?

Years ago, I did a case study on the newspaper Las Ultimas Noticias, in Santiago, Chile. They had been a total basket case; in the #8 place in an 8-paper market. Alive only because of a “species of corporate inertia.” Nobody had gotten around to killing them yet.

They started making their front page reflect the clickrates of the online readers, and they vaulted from dead last to #1 in the market. 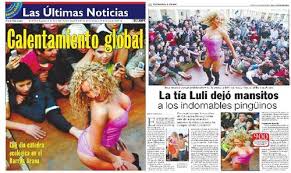 Aunt Luli and the indomitable penguins. Yeah, I’m not sure WTF is up with this cultural reference either. But hey! Cleavage.

Meanwhile, over at the New York Times, the idea that the news should be subject to all the same market forces as everything else on the web is driving David Carr a little nutso.

Is this really where we’re headed? Are we all in a headlong Race To The Bottom now, the one that all the hand-wringers have predicted for so long?

I’ll let Bob Cauthorn speak for my attitude on this. Years ago, I interviewed him about what he thought about the notion that traffic numbers reveal that all our readers really want is pr0n and fluffo celebrity pieces:

“Newspapers in their glory days – at the height of the power of modern journalism, in the 60s and 70s, when newspapers really made a goddamn difference – their circulation was exploding,” Cauthorn exclaimed. “Trust me, people who were reading about civil rights stories and Vietnam and women’s rights – these people were not reading fluff stories, you know?

“The assumption that if you align yourself with your readers – somehow or another you’re dumbing down – means that you think your readers are dumb. That’s the inescapable result of that logic.